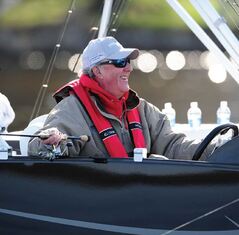 Ray Gildow
​     The list of Ray Gildow's roles is almost never ending, including restaurant manager, college administrator, and public television personality. In addition, he is an author, professional fishing guide, musician, husband, Lakeland Public Television board member, father, long time basketball coach, community volunteer and leader, fundraiser, active church member, usher and lector, and cancer survivor. With a resume as long and as accomplished as this, he was a fitting choice for this year's Duane R. Lund Award for Lifetime Achievement.
Gildow has also left a lasting legacy on the Staples Motley Area Community Foundation itself. He served as president of the SMACF board; founded the Little Red Caboose Variety Show; and raised thousands of dollars to benefit the community.
​     Former SMACF board member Mike Gold wrote in his nomination, "Ray has been a mainstay in the area as long as most of us can remember as his humility and quiet way of life have kept him out of the spotlight for far too long. I see Ray as a leader and a mentor. I see Ray as an example of how a man can blend career, fun, and generosity together to make a full life. I see Ray's influence on the quality of life we have in Staples Motley area."
In his acceptance video, Gildow reflected on the number of people who have mentored him, including this award's namesake. "The primary person who has influenced me was Duane Lund, who this award is named after, so I am incredibly honored," he said. Gildow made note that he didn't achieve anything alone. "I'd like to thank my wife Gwynne, who has been supportive of me and all the crazy things I've done here in town," he mentioned. "She's been a wonderful teammate and a great support for me in my life." 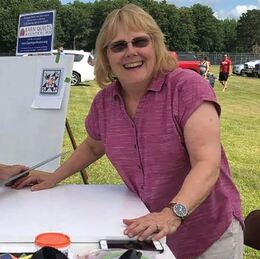 Lisa Kajer
Lisa Kajer has been a driving force in many different areas of our community. As an educator, she influenced our youngest learners to our seniors, starting both the preschool program and the Connections Project Based Learning School in the Staples Motley School District. Her passion for education continued into retirement and she currently serves on the Early Childhood Coalition, Connections High School Board, and the Bridges Career Academy. Staples-Motley educators still recognize the stellar example that Kajer made during her career; Chris Trout, who was one of her nominators, remarked, “Thank you Lisa for being a mentor to me and a servant to our community.”
The list of organizations that benefit from Kajer's volunteerism is seemingly endless. Faith Lutheran Church is on the receiving end of her efforts, as she helps with their garage sales and dinners each year. She and her husband support the Staples Food Shelf. Kajer is most recognized for her work on the Barn Quilts of Central Minnesota, an open-air art gallery throughout Cass, Morrison, Todd, and Wadena Counties. Due to her efforts, there are now over 100 registered quilts on the trail. To help visitors navigate the trail, she worked to develop a trail map and brochure, which was initially funded by a grant from the Staples Motley Area Community Foundation; they can be picked up at the Staples Historic Depot on Highway 10 or accessed digitally at www.barnquiltsmn.org.
Finally, COVID-19 did not stop Kajer from being involved in the community. Throughout the pandemic, she sewed masks for Lakewood Health System. “I felt like Rosie the Riveter,” she explained.  “Only I didn’t have a drill—I had a sewing machine.” She recognized that she was not the only one who worked to provide these now essential items. In her acceptance video, she added “Thank you to everyone who sewed face masks.”
Chairman's Award 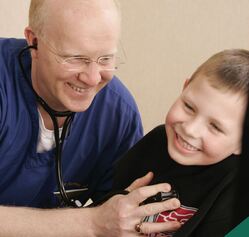 Dr. Freeman retired from a long and successful career as a Family Medicine Physician at Lakewood Health System on December 31st, 2020. During his time at Lakewood, he saw patients in the same-day clinic in Staples and in the Emergency Department. His contributions at Lakewood went beyond helping patients; he worked to attract and retain high-quality physicians in Staples by
founding the Rural Physician Associate Program (RPAP), a nine-month, community-based educational experience for third-year medical students who live and train in rural communities across Minnesota. He has been a leader and preceptor in the program since its inception and has even received the honor of being the RPAP Preceptor of the Year in the state.
By far, his most notable contributions have revolved around training and mentoring future physicians, as with the RPAP program, with hosting medical students in his home and ultimately mentoring and recruiting them to return and practice at Lakewood. Dr. Julie Benson, a former RPAP participant and current physician at Lakewood, wrote, “I am so grateful for my ‘random’ assignment to Staples with Dr. Freeman as a second-year medical student nearly 30 years ago. I was so nervous.  He and Dr. Lelwica took me in and gave me wings. Changed my life and my path. I am honored to have called him teacher, partner and friend for all these years. He is my hero! Lakewood won’t be
the same without him.”
“The difference he has made is so far reaching that his impact on our community will be for generations,” said Lakewood CEO Time Rice. “There are people who talk about doing things, but Dr. Freeman just gets them done,” he added. In his acceptance video, Dr. Freeman was humble and gracious. He spoke of his deep love for the Staples community and how easy it is to promote. “As I’m doing my job, it becomes second nature to promote Staples,” he said. Looking back on his career and time in the community, he stated, “When I got a job here in Staples, I hit a home run.” 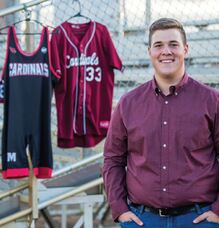 ​     This year’s recipient, Cole Winkels, received nine separate  nominations for the Youth of the Year Award. His nominees spanned from school district staff to neighbors to fellow congregants at Sacred Heart Catholic Church. The variety of perspectives provided on Winkels is a true testament to the breadth of his involvement and his commitment to our community. Winkels recognizes that his experiences across church, school, and the community have helped shaped him into the leader he is today, saying in his acceptance video, “I was able to be nominated and selected for this award by all the people who have influenced me and taught me to be a steward in my community.”
One such nominator was M.J. Simmons, Youth Minister at the Sacred Heart/St. Michael Parishes.  Simmons wrote, “Coles contribution to the community is threefold: in his loyalty to his school and peers; in his devotion to his family and friends; and his steadfastness to helping everyone.”  Winkels has served as an altar server since elementary school and volunteers his time with the annual Lenten Fish Fry.
Winkels is involved in nearly every aspect of the Staples Motley High School. He is an active student, with his career as a Cardinal featuring baseball, football, wrestling, baseball, theater, fine arts, and Student Council. Speaking to Winkels’ high level of involvement, Principle Mike Schmidt said, “He truly represents to our high school one of those students that we lean on, that we can rely upon…  When we ask Cole to be a part of things, we’re all better for it.”​
​Outstanding Business 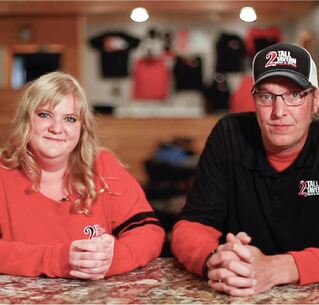 2 Tall Tavern
Owner and operator of 2 Tall Tavern, a bar and grill located in Cushing, John Brichacek has always participated in fundraisers in the Staples Motley
community. Each year, he donates to local food shelf and the Radiothon to End Child Abuse. He hosts annual events like the Classic Car Show, Pumpkin Carving, Craft Show, Vintage Snowmobile Run. In order to recognize local law enforcement, fire fighters, EMT, military members, and veterans he hosts a yearly event called “Never Too Much Respect.” However, in a year like 2020, it would have been easy for Brichacek to take time off and to focus on himself and his business. Instead, he double downed on his efforts to give back and support the community.
This year, Brichacek helped to organize socially distant, yet entertaining, events for families and community members. One such event was Music on the Lake, where rock band King’s Ransom performed from a pontoon while others gathered around in their own watercrafts. Over 100 boats gathered around to listen, with locals and visitors enjoying the escape from the stresses of living during a pandemic. In addition, 2 Tall Tavern hosted a craft show, featuring local vendors. This event not only provided another socially distanced activity for the community to benefit from, but also helped the vendors earn some extra money during a time when most events were cancelled.
During their acceptance video, 2 Tall Tavern Manager Briana Fischer recognized all the hard work the 2 Tall Tavern team puts into making these events a success. “Sometimes you just feel like you are doing all these things and you don’t really know if it makes a difference,” Briana said. “So I appreciate that John and this business can be recognized.”
Although he has already done so much to give back, Brichacek shows no signs of slowing down. “We have done a lot for our community,” he said, adding, “I want to do more.”
​